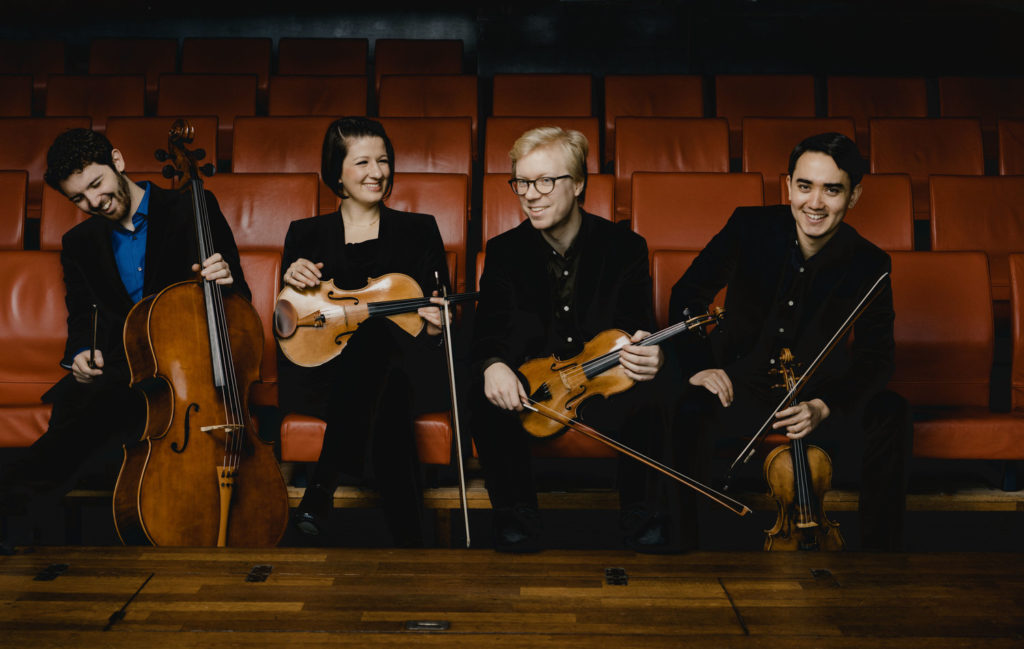 Formed in 2013 at the Royal College of Music in London, the Marmen Quartet is fast building a reputation for the courage, vitality and vigor of its performances. 2019 marks a year of significant achievement for the Quartet, having won the Grand Prize at the Bordeaux International String Quartet Competition as well claiming First Prize at the Banff International String Quartet Competition, where they were also awarded the Haydn and Canadian Commission prizes.

Other accolades include first prize at the Royal Overseas League Competition (2018) and awards at the International Joseph Joachim Chamber Music Competition.

The Marmen Quartet has performed at venues including Wigmore Hall, Milton Court (Barbican), Palladium Malmö and Muziekgebouw Eindhoven. Other recent highlights have included performances across the UK as part of Music in the Round’s ‘Bridge Scheme’ (2015-17), as well as regular appearances at the Wiltshire Music Centre where they are Young Quartet in Association and throughout Sweden. Festival engagements have taken the Quartet to the Hitzacker, Lockenhaus, Edinburgh Fringe, North Norfolk and Lake District Summer Music Festivals.

The 2019/20 season sees debuts at the Berlin Philharmonie, Amsterdam String Quartet Biennale and the Graffenegg Festival as well as extensive European tours including performances in Zurich, Paris, Würzburg and Nuremberg. The Quartet performs regularly across Sweden and 19/20 brings their first Beethoven String Quartet cycle with Musik I Syd. Another season highlight sees them perform Martinu’s Concerto for String Quartet and Orchestra with the Helsingborg Symphony Orchestra. Further afield, the Quartet makes its Japanese debut in a tour including performances in Osaka, Nagoya and Tokyo.

The Marmen Quartet currently holds the Guildhall School of Music String Quartet Fellowship and studies in London with Simon Rowland-Jones and John Myerscough (Doric Quartet). The Quartet is also completing a Master of Chamber Music with Oliver Wille at the Hochschule für Musik in Hannover. They were mentored by the late Peter Cropper and have received support from the Musicians Company/Concordia Foundation, the Hattori Foundation, Help Musicians and the Royal Philharmonic Society (Albert and Eugenie Frost Prize).

To view the previous quartets that Concorda have had to visit, click here.