Born in London, Katherine Hunka began playing the violin at the age of four. Whilst growing up under the guidance of teacher Sheila Nelson, she performed chamber music at London’s South Bank and the Royal Albert Hall, was soloist with the City of London Sinfonia and led the National Youth Orchestra of Great Britain.

Katherine was awarded a scholarship to the Royal Academy of Music where she spent five years studying with Gyorgy Pauk, and then furthered her studies in the USA at Indiana University where she also acted as teaching assistant to her professor, Mauricio Fuks. This instilled in her a great love of teaching. She has since returned to Indiana as a guest Professor and been made a Fellow of the Royal Academy of Music.

Katherine is Leader of the Irish Chamber Orchestra since 2002 and regularly directs from the leader’s chair. As director and soloist, with the ICO, she has toured Germany, China and Singapore, appeared at the West Cork Chamber Music Festival, and more recently, at the Kilkenny Arts Festival where she co-directed late Beethoven quartets, arranged for string orchestra, with ICO principal cellist, Christian Elliott.

Katherine directs ICO national tours, which take the orchestra all over Ireland. In 2017, Katherine released her first solo CD recording with the ICO of Piazzolla’s The Four Seasons of Buenos Aires. As part of her role with the ICO, Katherine collaborates with contemporary composers. She has directed premieres with Irish composers including Sam Perkin, Ian Wilson, Raymond Dean, Elaine Agnew, Linda Buckley, and John Kinsella. As leader, she has also enjoyed performing solo concertos and chamber music with Jörg Widmann, Pekka Kuusisto, Anthony Marwood and Nigel Kennedy amongst others.

Katherine performs regularly, as a chamber musician and soloist, at festivals throughout Ireland and the UK. At the Aldeburgh Festival she premiered Benjamin Britten’s rediscovered Double Concerto. Last year Katherine appeared at the Sligo International Chamber Music Festival, the Killaloe Chamber Music Festival and performed much of Brahms’ chamber music at the Kilkenny Arts Festival. She is a regular guest to concert venues across Ireland. Her trio, Far Flung with accordionist Dermot Dunne and bassist Malachy Robinson delights audiences with its light-hearted approach, their repertoire spans from Bach to Klezmer with anything in between. They are currently touring Ireland and will soon be releasing a CD recording.

She is currently a Professor at the CIT Cork School of Music and the Irish World Academy of Music. She plays a Grancino violin and her bows are by Irish maker Gary Leahy.

Peggy was born in Dublin where she studied at the Royal Irish Academy of Music before commencing her third level education at the Royal Northern College of Music studying with Peter Dixon and Raphael Wallfisch. She enjoys an rich and varied musical life centred around chamber music, orchestral playing, and teaching.

As cellist of the Eblana String Trio since its formation in 2006, Peggy has performed in France, Germany and South Africa, as well as throughout the UK in a wide variety and festivals and venues including the Wigmore Hall, St Johns Smith Square and Manchester’s Bridgewater Hall. The trio are currently City Music Foundation Artists, and former Park Lane Young Artists. They have been broadcast on BBC Radio 3 and are recording their debut CD of British string trios in 2019.
In addition to performing the core string trio repertoire, the trio also has a keen interest in commissioning and performing new works, and have given several World Premieres as part of recitals for the Stratford Upon Avon, King’s Lynn, and SoundState festivals . The Eblanas have all been members of the chamber music faculty at the conservatoire since holding the position of Junior Fellows in Chamber Music from 2013-2015, a role which involved delivering seminars and providing mentoring to students within the string department.

Outside of the trio Peggy has appeared with a variety of different chamber groups including the Pleyel Ensemble, Robinson Panoramic Quartet, and contemporary music groups Psappha, Vonnegut Ensemble and the Crash Ensemble. She works regularly with a string quartet with the objective of widening their horizons into different genres including jazz and folk music, and has played with artists such as Stuart McCallum, Alfa Mist, The Breath, Jordan Rakei and Alice Zawadzki. Also a busy freelance orchestral musician, Peggy regularly performs and tours with some of the UK’s finest orchestras including the BBC Philharmonic, Hallé, Manchester Camerata, and English National Opera, as well as the Irish Chamber Orchestra, with whom she has toured in Ireland, Germany, Belgium and the USA.

In 2016 Sophie graduated with First Class Honours. During her degree she had the opportunity to study composition and conducting. Sophie is currently studying Double Bass performance at the Royal Conservatoire of Scotland under Nikita Naumov.

Sophie has been involved with IAYO and music education in Ireland for several years. She was a founding teacher of Musica Fusion School of Music and had the opportunity to conduct the school’s orchestra in the IAYO Festival of Youth Orchestras. She has also worked with the National Youth Orchestra of Ireland tutoring double bass on their “Touch Bass” mentoring scheme.

Sophie has worked with Concorda for the past 4 years and was a participant on the course for several years and is delighted and excited to be working as the courses new general manager.

Adrian Petcu has lived in Cork since 1978 and is now Senior Lecturer at Cork School of Music. His performing activities in his native Romania included solo, chamber music and concerto appearances and also membership of various prestigious orchestras with whom he toured Europe, Australia and New Zealand. Before coming to Ireland, he held a teaching position at Music Lyceum, Bucharest, tutoring students of recognized international standard. Here with the Lyceum Chamber Orchestra, of which he was founder and coach, he was awarded the Gold Medal at the International Competition, Poland 1978.

His musical activities in Ireland are equally wide – solo violin and viola appearances with orchestras, duo recitals, chamber music performances and recordings. With such groups as Jupiter Ensemble, D Amici Flute Quartet, Arum Ensemble he gave recitals throughout Ireland and as a member of the Crawford Piano Trio he consistently championed works by contemporary Irish composers and performed throughout Europe, USA and Japan. Their recording on Altarus Label of Philip Martin’s Serendipity, based on seven paintings in the Crawford Gallery, Cork, was critically praised. 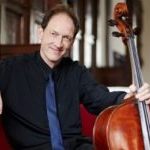 In 1985 he joined the Vanbrugh Quartet and the following year the Vanbrugh won the position of Resident Quartet to RTÉ, based in Cork. Two years later the quartet won the London International String Quartet Competition and an international career quickly followed, taking in more than 2000 concerts throughout Europe, Asia and the Americas. Over the past 30 years the quartet has collaborated with many of the world’s great artists and has enjoyed invitations to leading festivals and concert venues. The Vanbrugh Quartet has released thirty CDs encompassing a wide range of repertoire, from the complete Beethoven quartets to many recordings of contemporary Irish quartets.